The Functions of Film in the British Empire 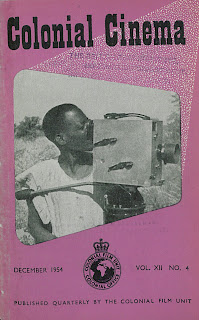 In 1941, William Sellers, the head of the recently formed Colonial Film Unit (CFU), published an article about African audiences, entitled ‘Films for Primitive Peoples’, in which he proposed a model for mobile film shows in Africa. Sellers suggested that a good way to get the crowd’s attention was for the commentator to ‘ask a question to which the obvious answer is “yes”.’ Such a question, Sellers suggested, might be “Are you proud to be British?”. The question would be asked three times, he explained, ‘almost every member of the audience will reply and their answer comes back in a roar.’ A decade later, when Sellers revisited these plans, the suggested question had intriguingly changed from “Are you proud to be British?” to “Are you all well?”

So why begin with this example? First, it provides a neat illustration of the shifting political situation within Africa in the last decade of colonial rule. The initial question (‘Are you proud to be British?’) also hints at the ways in which the CFU saw these film shows as political events, as a way of monitoring, addressing and homogenising disparate groups of colonial subjects. Film shows were imagined here as a microcosm of the empire; a way of organising the colonial space, for example through carefully outlined seating plans that reaffirmed traditional hierarchies. Reports also suggest that some government officials took most pride in discovering that the crowd had learnt to stand to attention at the end of the show and sing the British National Anthem.

Dr Tom Rice of the Department of Film Studies is currently working on a book on the Colonial Film Unit, which produced, distributed and exhibited film across the British colonies from the 1930s until independence in the 1960s, but his interest in this topic began almost a decade ago when Tom worked on a major 3-year AHRC project on colonial film. The project provided the perfect opportunities for a (then relatively) young researcher: working with major archives, part of a great team, multiple academic and public events, and the chance to research, write and publish extensively. However, there were also limitations here. As the project was focused on the individual films held within the British archives, inevitably there were ‘missing’ films and histories. It also became increasingly apparent that the government films told a partial story – they are often most interesting for what they don’t show – and that many of the histories that most intrigued Tom appeared beyond the screen.

The opening example provides a case in point. Sellers’ writing hints at the integral role of the local film commentator, who might set up the screening, provide an introductory lecture, answer questions, and translate and talk over the films. The commentator would offer call and responses, ask questions of the audience, outline the intended message of the film and direct where the audience looked on screen. He might talk over or replace the British voice on the soundtrack and, in this way, represented a new voice within African cinema. Audience responses show how the commentator could completely transform a film, even prompting widespread laughter during a film on venereal disease.

Looking at audience reports and government documents further confirms that audiences did not always respond as the authorities expected. At the height of the Emergency in Malaya (Malaysia), the government cancelled screenings of a propaganda film made by the Malayan Film Unit after reports that cinemagoers had cheered the onscreen appearance of communist leader Chin Peng. In Nyasaland (Malawi), the mobile unit was blocked from reaching its destination, while on other occasions nationalist leaders took to the microphone. In Ghana, a lamp was actually fitted to the screen to prevent unrest amongst the audience, using the cinema screen to light up political dissidence; an example of the film watching the audience.

Tom is now beginning a Leverhulme Fellowship, which will allow him to move further beyond the British archive (with research trips in Ghana and Jamaica) and access additional materials (films, interviews, government files, and has collaborated with the BFI to digitise the CFU’s quarterly magazine). In examining film’s role in administering, controlling and visualising a rapidly changing Empire, the book will provide a new historical perspective on the last decades of the British Empire. It will also offer a fresh take on British cinema – instructional and educational, often run by civil servants and sanitary inspectors – and, as we see the formative moves towards film production and exhibition in a number of countries, new insights into global film history.

You can view a number of the CFU films at www.colonialfilm.org.uk